Individuals over at the Advocates for Highway & Auto Safety seem to think so.

Advocates for Highway & Auto Safety recently released its 2019 Roadmap of State Highway Safety Laws and in it, not only are there some shocking statistics, but also seven different laws advocates believe need to be modified or enforced that could potentially help reduce the number of fatal accidents that are occurring on our roadways. The fact is “each day, on average, over 100 people are killed and 8,500 more are injured on our Nation’s roads.” In 2017, there were 914 fatalities recorded as a result of motor vehicle crashes in the state of Indiana alone and over the past 10 years starting from 2017, a total of 7,876 fatalities were reported. END_OF_DOCUMENT_TOKEN_TO_BE_REPLACED

Car crashes have been and continue to be a leading cause of injury and death in Indiana as well as all other states in the U.S. One of the reasons why this statistic stands true has to do with the behavior and attitude of certain motorists. Not only are drivers not being cautious or courteous to one another, but they are also unaware of certain laws they are required to abide by which only increases the chances of a crash transpiring. For instance, there are a significant number of drivers today who are unaware of which types of vehicles they are required to give the right of way to which results in them failing to do so and encountering some pretty close calls. END_OF_DOCUMENT_TOKEN_TO_BE_REPLACED

Fox News recently reported on a car accident that occurred last month involving Carmel Mayor Jim Brainard. The source said that when Brainard attempted to make a U-turn, he struck another vehicle while driving a city-leased vehicle. Fortunately, Brainard nor his passengers suffered any injuries and did not require medical attention, although the 2017 Ford Fusion he was driving did sustain more than $5,157 worth of damage. END_OF_DOCUMENT_TOKEN_TO_BE_REPLACED

Whether you’re hosting a birthday party, bridal shower, or a party to ring in the new year to celebrate all the new resolutions you and your friends have created, you should familiarize yourself with Indiana’s social host law. The fact is, as a host, you have a great deal of responsibility placed on your shoulders, aside from keeping your home under control and your guests happy.  You are responsible for overseeing how much your guests drink and prevent them from consuming too much. While many are under the impression that their guests have the liberty of drinking however much they want, the law states otherwise. END_OF_DOCUMENT_TOKEN_TO_BE_REPLACED

It’s never easy to accept the loss of a loved one, especially when their death was unexpected. Not being able to say goodbye or get in those last words makes losing someone that much more difficult. While losing someone close to us is hard enough, it’s even harder when the person we lose is one of our children. Children are supposed to outlive their parents, not vice versa, but sometimes, accidents occur that are responsible for taking their lives. END_OF_DOCUMENT_TOKEN_TO_BE_REPLACED

A Hammond resident has decided to come forward and sue the Lake County Sheriff’s Department for a car collision that occurred back in 2016 that left him suffering from multiple conditions. Carlos Gallegos-Esqueda’s vehicle was struck at the intersection of Columbia Avenue and Gostlin Street by a Lake County officer who claimed he was in pursuit of a suspected drunken driver [Source: NWI Times]. The police report says that Officer Anibal Ramos “was in the process of turning his emergency lights and sirens on” when he drove through a red light at the intersection and never stopped. END_OF_DOCUMENT_TOKEN_TO_BE_REPLACED

As we approach the end of the year and some of the most recognized holidays, you may begin to hear about more and more accidents occurring on Indiana roadways. During this time of year, roadways tend to become more congested and many drivers begin to show signs of carelessness and negligence which ultimately contributes to more crashes occurring. Just a few days ago, the Chicago Sun Times reported on a major wreck that transpired in northwest Indiana on I-80 just before the Grant Street exit. END_OF_DOCUMENT_TOKEN_TO_BE_REPLACED

As the temperatures drop in Gary, IN, Indiana State Police (ISP) Lowell District remind drivers to be cognizant of how dangerous the roadways can become when streets are icy or slick. ISP recently released a statement to the public saying that “Just because [the roads don’t] look icy/slick doesn’t mean [they aren’t]” [Source: The Michigan City News-Dispatch]. The statement comes after officials responded to more than 70 crashes in a 12-hour time period that began on November 12th  at 4:00 p.m. and ended on November 13th  at 9:00 a.m. in Northwest Indiana. END_OF_DOCUMENT_TOKEN_TO_BE_REPLACED

If you live in the state of Indiana, then you know that there is more the winter season brings than just the cool weather and beautiful scenery. It also brings danger to the roadways. Because the winter weather causes roadways to become icy and slippery, it increases the chances of a driver engaging in an auto accident.  Did you know that “winter-related vehicle accidents kill more people annually than large-scale weather disasters” [Source: The Weather Channel]? END_OF_DOCUMENT_TOKEN_TO_BE_REPLACED 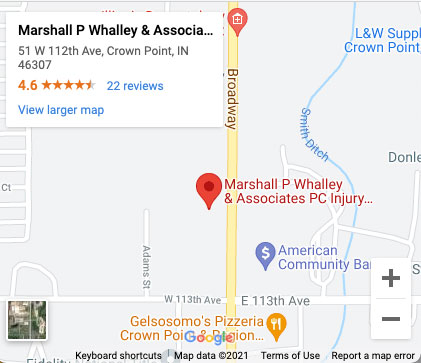